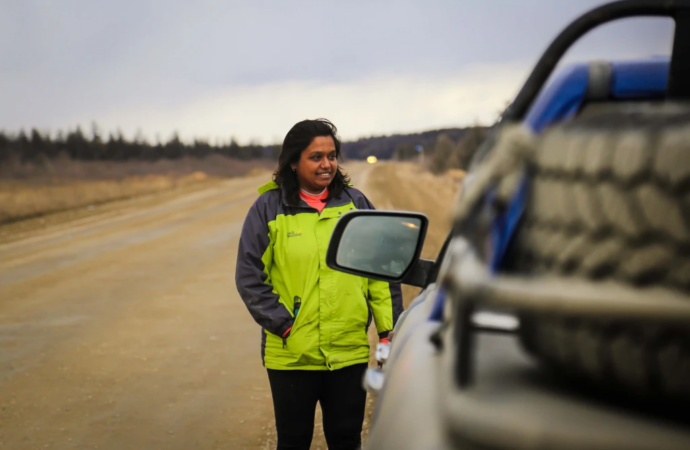 A facilitator of extreme Over-landing and off-roading expeditions.

In a convoy of 4x4s, the Lead car has a significant role to play. It’s the first in command and is responsible for measuring the ground with its wheels, assessing if the path ahead is traversable. Nidhi Salgame has been leading convoys in and outside India through Wander Beyond Boundaries since 2018. She is at her most comfortable sitting in the driver’s seat, not just in a car but in her life.

There’s a certain cultural competence required for travel, and the moment you cultivate that, you’ll be pretty okay, I founded the extreme overlanding venture with my late husband Satender ‘Satty’ Malik to offer expeditions that are, in her words, designed to challenge and push individuals to areas that reveal their true selves. Overlanding involves travelling to remote locations that have rarely been explored, and I have been doing that for several years.

Before she took to the steering wheel, Nidhi had been a trek leader. She’s been trained at the wilderness adventure school named Outward Bound and calls its co-founder Kurt Hahn her guru, believing in the philosophy of training the mind through the body. She is also a trained Wilderness Emergency Medical Technician. Driving came out of a necessity to take her two children along on her expeditions.

The first time she drove was in 2006 when she was 24. At the time, the only vehicles that would take her to the terrains she wanted to explore were 4x4s and she didn’t have the money to buy one. So, she bought an old Jeep chassis and fitted it with a Bolero engine with the help of a friend. She trained herself as a driver through a punny weekend offroad club called Jeep Thrills in Bengaluru, where she grew up.

“Our only intent was to push ourselves and our machines,” recalls the Founder and Director of WBB.

By 2015, she had driven on the toughest roads in the country, in pursuit of her next challenge. Along the way, Nidhi became the first woman to drive solo from Delhi to London, traversing 23,800 km.

I was also going through a rough patch, personally. I got divorced in 2016, so it was more about building a life on my own. In the same year, I completed the Pole of Cold expedition, becoming the only Indian to travel solo across Siberia in the dead of winter. The journey was challenging to say the least and did everything I could do to survive, including eating raw horse meat. Now, in hindsight, I think that was a bit of a death wish but for me, every journey has been about testing the metal I’m made of.

For the Delhi-London expedition, it took Nidhi and her small troop eight months to raise Rs 10 lakh and find a vehicle sponsor. A friend suggested she name her group Women Beyond Boundaries as a pioneer of women-led extreme expeditions that would easily attract sponsorship.

I realised that men were showing a lot of interest in the kind of journeys I was doing and they found it odd to come with Women Beyond Boundaries, she recalls. Nidhi was also uncomfortable with the name, believing that driving is a skill set that one learns by spending long hours behind the wheel and had nothing to do with gender.

WBB, at the end of the day, is an evolution from my trekking days. We are a kind of amalgamation of driving and outdoors. Although bootstrapped, the founder says the venture was never conceptualised as a business. It started as just an idea for people like us who find meaning in wandering, in journeys that are difficult she says, quipping, “We love this life. It doesn’t make financial sense beyond a point at all!” In the last four years, WBB has undertaken many expeditions. Nidhi shares

Nidhi led the first women’s crew to Lo Manthang in Upper Mustang, Nepal in 2018 with a convoy of 18-19 cars. Other expeditions include Pearl in the Bush in Uganda, Winter Kel Suu in Kyrgyzstan, Shamshabari in north Kashmir, Zanskar and beyond in Ladakh, and Arunachal 97 degrees East. The expeditions are usually 12-16 days long and cost anywhere between Rs 1.5 lakh to Rs 5 lakh per person depending on the geography and whether it’s in India or outside. The clientele is usually Indians aged 45+ who seek transformative travel.

Over the past year, WBB has been working to put Nagaland on the offroading map. Nidhi and Satty fell in love with the state on WBB’s debut expedition in May 2019. “The first time we reached Shilloi Lake, there was just a light and not a soul around. We changed in the car, mixed rum in our water bottle, and didn’t even have food. We hadn’t eaten since morning and drove straight from Kohima. All we had was some bhujia (snacks),” Nidhi recalls fondly.

Sponsored by Nagaland Tourism, the project is envisioned as a conduit where WBB facilitates expeditions for people interested in exploring remote areas of the state, giving them access to routes through a website, app and guidebook. It also provides information about places to eat and sleep, and how to prepare, and equips them with a self-drive fleet of 4x4s. But just as it took wing, Satty passed away and Nidhi was left to complete the project on her own.

There’s very little in your hands

Nidhi and her four-member team, supported by travel and food writers Anurag Mallick and Priya Ganapathy, mapped routes with help of GIS data across all 16 districts in Nagaland. They documented information and created reference points for offroading. So what kept Nidhi sane throughout all this?