The Man Who Is Using Cameras To Revolutionize Agriculture In India 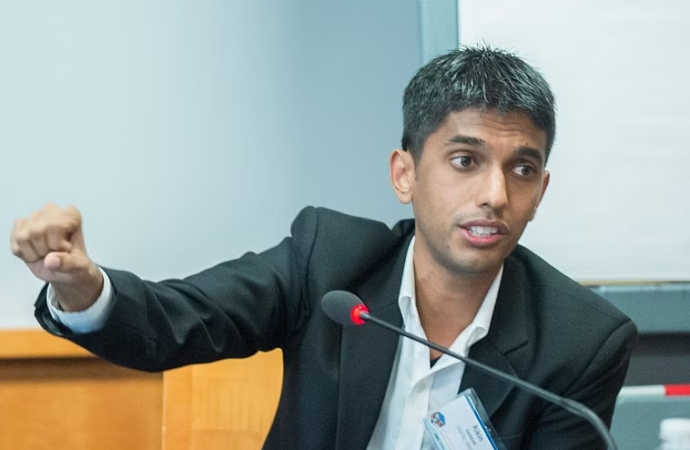 Here’s how Digital Green is enabling farmers to become video filmmakers, which is turning them into more productive farmers and more confident human beings. All of this has been made possible by Rikin Gandhi, an Indian-American aerospace engineer, who had not even seen a village before 2006!

Agriculture is the only thing we do for income generation and if we are not even doing it properly, how will we survive? I got associated with a local self-help group (SHG) in my village and they connected me to a team which taught us amazing things through videos.

Right from guiding us on farming techniques to irrigation, Digital Green has helped us a lot. You won’t believe that earlier I used to get 50-55 kgs harvest on my farm, but after learning from the videos, I now manage to harvest around 70 Kgs. Snehlata Sinha, one of the beneficiaries of Digital Green in Sardar Bigha village of Nalanda.

All thanks to Rikin Gandhi and his NGO Digital Green, many villagers like Sanehlata are following better farming practices.

Gandhi, an Indian-American who had never seen a village till 2006, is now reaching out to over 6,000 villages through his organization and working to improve the lives of thousands of farmers.

Digital Green is a platform which is enabling villagers (especially women) in some of the remotest locations to produce videos using camcorders with help from local NGOs and government agencies. These videos promote best practices in agriculture and livelihoods and typically feature local community members, thus, increasing the credibility of the videos in convincing the farmers.

I feel technology can provide some of the most advanced solutions in the simplest ways. And we are using technology to help the most important people of the community, who provide us food.

Agriculture was not what Gandhi always had in mind. This aerospace engineer from MIT wanted to be a pilot. A minor eye problem came his way when he applied to the US Navy for a space shuttle programme and he ended up working on the ground.

In 2006, he got a chance to visit Indian villages as part of a Microsoft Research India project, and the visit changed his life forever. “I had no expectations or ideas when I went on the ground. I just wanted to check whether people respond to the technology,” he says.

Gandhi went to a local NGO and used audio-visual tools to engage farmers, and eventually came up with an idea to set up Digital Green, where he would help farmers across India to share the best agricultural practices through videos.

I spent a few months thinking what could be done and how can we intervene. I figured that featuring local farmers in the videos and enabling them to make their own videos will create a bigger impact.

There was not a team of experts who makes the videos, but local farmers who learnt the art of filming with Digital Green’s help.

Digital Green’steam of 77 members works across eight states of India to train farmers to produce and show videos which showcase their problems, solutions and success stories.

The USP of the organization lies in its ability to seamlessly embed its approach within partner organizations that engage with rural communities, helping to increase the impact of their extension services. 85 per cent of the beneficiaries are women as they are encouraged to come forward.

Digital Green’s team trains the farmers to film videos on various topics like agriculture, health and livelihood practices. It is durable, low-cost and easy-to-use instrument that are used by a team of four to six individuals from the community to produce a video, which typically takes 3-4 days to film. Farmers watch these eight to ten-minute videos in their communities every two weeks via battery-operated Pico Projectors.

The work does not end with merely creating the videos. A facilitator from each village uses the videos to stimulate a discussion around the videos to ensure that people are making the most from them.

Digital Green is supported by grants from donors, government agencies and private foundations and has cost-sharing agreements with its partners.

It is very important to keep the government involved. It somewhere facilitates the entire process and also enables us to use the existing resources in rural areas.

“When I started Digital Green, I wasn’t sure how successful it will be. But within two months of the screening of the first video, 58 per cent of the farmers had implemented the lessons learnt on their farms,” says Gandhi.

Apart from enabling villagers to access better technologies and solutions, Digital Green has also helped people in becoming more confident. “I have seen women who would be really shy in the first video in which they are featured, speak confidently and loudly in the next video. The pitch of her voice rises and you can see the positive change in her body language,” Gandhi says.

Digital Green’s network of partners and communities has produced over 4,000 videos in 28 languages so far. Digital Green is expanding its geographical footprint in partnership with the Government of India’s Ministry of Rural Development across 10,000 villages over the next 3 years and has extended its presence into parts of Ethiopia, Ghana, and Afghanistan as well.

“Though we already have videos on various agricultural topics, we have seen demand from the community on issues related to nutrition and health, and now have content in those areas as well,” Gandhi says.

From cost reduction to increased yield and better health solutions, the videos have left a huge impact. “In some cases, the yield has almost doubled after following the techniques taught in the video,” says Gandhi.

I was using a traditional method earlier. But Digital Green showed us a video on how to use a system of rice intensification (SRI) technique. Now our yield has increased, cost has reduced and the crop is also much better in quality. Earlier, we didn’t have any idea of this. Also, it feels good to see known faces in the video, gives us a sense of trust.

I think that people should just go out in the field, immerse themselves in rural communities, identify real problems, and take a human-centric approach to design solutions. Technology platforms can amplify the effectiveness of development across multiple sectors