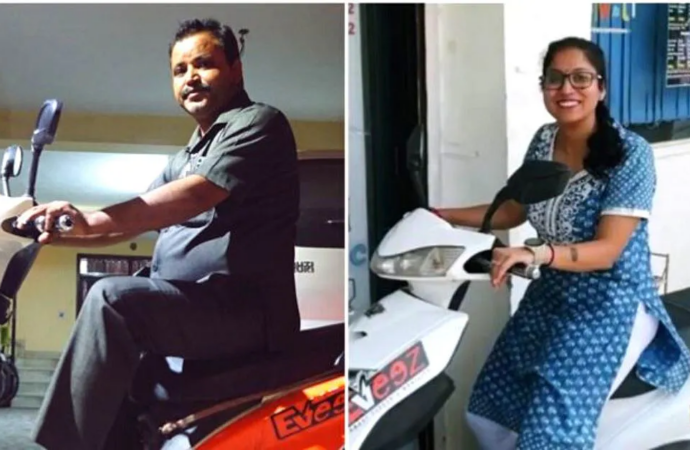 Electric two-wheeler – Talk of the town.

Electric two-wheelers are more popular than ever, especially among India’s middle class. But a few businesses in Delhi are ingeniously using them to boost their profits while curbing vehicle emissions in the Capital.

Delhi is witnessing a significant transformation in the mobility sector and this is largely driven by electric scooters.

Nearly 7,000 electric two-wheelers were sold in Delhi in the first three months of 2022. Factors for this increase include reduced fuel costs, low commuting hassle, the ability to bypass traffic, and lightweights, to name a few. In fact, this figure was more than the combined electric two-wheelers sold in 2021.

The ease of charging at home, having multiple charging stations in public, and lower cost of running are only a few advantages they offer. While many have switched to using them for daily commutes, a few residents are using them to “electrify” their small businesses.

From mom-and-pop stores that offer flour milling and grinding services to local dry-cleaning services and companies that deliver fresh produce at home — electric two-wheelers have become the talk of the town.

“I was using a Honda Activa scooter for 10 years before I realised that an electric two-wheeler could be a more sustainable option for my business,” Krishan Kumar Bajpayee, a distributor who works for Mother Dairy, tells The Professional Times

He runs a small distribution line for Mother Dairy and supplies butter, curd, buttermilk, lassi, and cottage cheese to about 120 shops in Safdarjung Enclave. While he once paved its varicoloured lanes on a petrol scooter, he now uses a silent electric scooter to make his evening rounds every day. His employees, all young boys, also use the electric scooter to make their deliveries.

“It has been a good experience. The EV has a lot more space and can easily be charged at home. It is financially beneficial and costs me less than an Activa,” he adds.

The 48-year-old rents his e-scooter from Delhi-based company Eveez, priced at Rs 130 every day. Earlier, he would spend Rs 205 on petrol daily.

But he took the decision to switch to an EV to primarily fulfil his responsibilities as a good citizen, he notes.

This does not emit any pollution. While I had a pollution-under-control certificate for my previous ride, it still emanated some gas or the other. I personally do not face the ill effects of pollution in Delhi but I know many others do. I know how bad it gets. I wanted to be a responsible citizen. Why should others pay for the decisions I take?

According to the Centre for Science and Environment (CSE), Delhi has 55 lakh two-wheelers, which contributed to 32% of the Capital’s pollution in 2018. Surprisingly, these two-wheelers caused the maximum pollution that year, and continue to do so.

Electric two-wheelers added the essence of sustainability and provide cost incentives to his business. His company, Fresh Produce Shoppe, also rents e-scooters that can run 60-70 km on a single charge and can be charged within four hours. Our delivery executives used cycles earlier.

In 2021, we got a couple of e-scooters on a sample basis. Eventually, we thought they worked great for our business. Our decision was based on making sustainable choices and making sure vehicles do not emit any pollution. Besides, normal fuel is very expensive.

Anuj Soni, who runs a grocery delivery service in Delhi,

While his company used a diesel-engine truck until about 4-5 years ago, he switched to a CNG mini-truck to avoid toxic emissions. Now, with a couple of CNG minitrucks and a fleet of rented EVs, Anuj’s executives make about 100 deliveries every day from their stores in Gurugram and Delhi.

“We are now doing more deliveries than ever. My executives can also deliver a product from a south Delhi store to distant areas like Rohini without damaging the environment or causing any pollution,” he adds.

Anuj says that as someone who worked with leading banks like HSBC and HDFC on sustainability projects, he feels the need to step up and make strong decisions to change the status quo. “I can sit and give sermons to others, but I need to focus on actually doing something in the long run.”

His company was also one of the first ones in Delhi to ditch single-use plastic bags and shift to non-woven bags for packaging.

“The trigger point of our business is to avoid using plastic bags that damage the environment,” he says. With these sustainable choices, Anuj and his company are now catering to 2,500-3,000 clients in Delhi-NCR.

Meanwhile, Ghaziabad resident Sarla Rajput is a new-age businesswoman transforming the way her employees move in the city. She started her shop Fabric Dry Cleaners about a year ago and has since opened up five branches in NCR.

“When the COVID-19 pandemic began, the lack of employment opportunities pushed me to start my own business. With my husband’s help, I opened up a dry cleaning store in Ghaziabad on a small scale.

Sarla says that she decided to use rented EVs for her business due to two reasons —  curbing pollution and monetary profit.

She felt that having her own vehicle or letting delivery executives carry their own vehicles would be counterproductive. I would have had to take care of money spent on petrol with other vehicles, but using an EV allows me to focus on other aspects of the business.

Her delivery men can use the EV once it is charged and continue until the battery finishes. “However, the environmental benefit of using an electric two-wheeler was the biggest reason to make the switch,” she says.

When she started her business, making it environmentally friendly and sustainable was a core tenant.

Wingify Earth supports such local businesspersons in Delhi who are switching to cleaner mobility alternatives for deliveries.