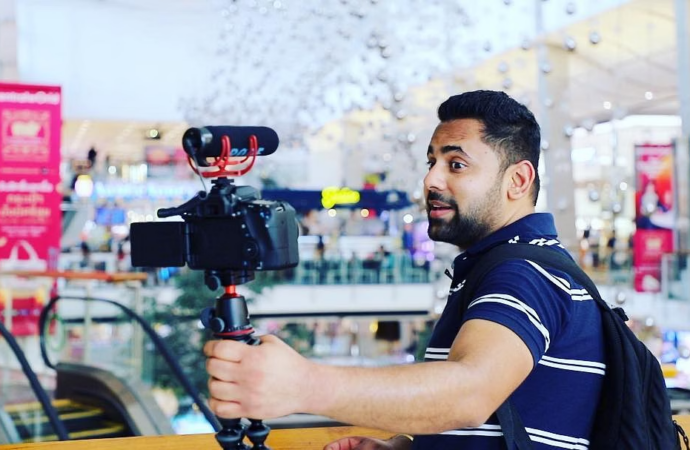 Experience of a travel vlogger

Mohit Manocha, aka Traveling Desi, shares his experiences as a travel vlogger and content creator on YouTube, and how he went from running his uncle’s business to making a living while pursuing his love for travel.

Mohit Manocha, more popularly known by his moniker ‘Traveling Desi’ is in Colombia with his wife Sandra.

The 36-year-old travel vlogger and content creator, who has 1.83 million subscribers on YouTube, is documenting the difference between how the country is depicted on OTT platforms and how life really is on the ground.

Not only is Mohit in the country to take in the sights, but also to meet the locals, and understand their way of life, and the local cuisine. He asks the people here about the global perception of Colombia as a haven for narcotics and their own perception of India and the small minority of Indians living there.

Speaking to The Professional Times, Mohit mentions of his encounter with an Indian who’s married to a Colombian and now runs a business there. Tomorrow, he is visiting Medellín, a city famous for its coffee, flower farms, and the notorious drug lord Pablo Escobar, immortalised in recent years through the Netflix series Narcos.

Growing up in Faridabad, Mohit was an average student and “back-bencher” in school. In contrast to his elder brother, who was studying engineering in college, he was perceived as a “spoiled child” by members of his extended family, who felt that he wouldn’t amount to much in life.

After graduating from high school, an uncle who had started a software company asked his father to allow Mohit’s elder brother to join his new company. As fate would have it, Mohit’s brother was in his final year of engineering and wanted to focus on earning his degree.

Instead, his father recommended Mohit for the job, because he had three months of summer holidays left and had no clear vision of what he wanted to do in life.

My uncle was initially sceptical about hiring me because of the reputation I had in my family. However, I picked up the business really fast. By the time I was 18, I was able to sell $60,000 worth of anti-malware software to clients in the United States, Canada and Australia. I could speak fluently in English and had a natural ability to sell things.

Impressed by his salesmanship, his uncle gave Mohit a 25% stake in the company the following year.

“At the age of 19, I began earning about Rs 1 lakh per month. College was now out of the question. Over the course of the next seven to eight years, I grew my uncle’s business. Till the age of 28, I was doing well, earning as high as Rs 40 lakh a month and investing my earnings in real estate while indulging myself by buying big cars,” he adds.

However, success in business made him complacent and he took his eye off the ball, he says. His business stopped growing and this was followed by a string of serious personal problems that resulted in depression. To get away from his surroundings, he started taking small trips abroad.

“As I began travelling more frequently, my friends would constantly ask me for suggestions regarding visas, itineraries, places to visit, etc. So, I decided to make videos with all the necessary information instead of answering the same questions over and over again,” he says.

By 2018, his business had shut down. His career prospects looked dim since he had only studied up till high school. But there were savings from the “good old days’” when he used to travel.

“With my business done and dusted, I only had a couple of skills — how to present things, speak well, and be useful in explaining things in a simple way. So I began reading up a lot more, watching documentaries about the destinations I was visiting, and continued making videos about the places I would visit in Southeast Asia and Western Europe,” he says.

Starting out, he had his share of challenges. Travelling and making videos was a very expensive proposition, given he knew nothing about editing and how social media metrics work.

His first video was called ‘Amsterdam Rs 30,000’ published in June 2018. The video was about how you could spend a week in Amsterdam with Rs 30,000 including accommodation, food, etc. Prior to this, he shot a full series in Poland and Austria, where he went on a road trip with his nephews.  Recording this on his phone, he realised the audio quality was poor while sorting through the footage on the editing table.

We spent about 12 days in Poland and Austria, spent about Rs 3 lakh, and recorded a lot of footage. But we realised on the editing table that I was too far away from my phone and that there was a lot of ambient noise. The final video I put out didn’t do well. It accumulated just 5,000 views and I had no choice but to pull it down. What I needed was a vlogging camera that I could talk to, and a phone to shoot the B-roll of the said location. After picking up some video editing skills from my previous experience, I was ready to go again,” he explains.

On his next trip to Amsterdam, he shot for seven days, visiting every popular landmark. By the end of the trip, he had around 3,000 clips to edit. It took him about 80 hours to edit his first video, which had a running time of about eight minutes.

Mohit put everything he had into the video because his business had failed and he was looking to turn the page professionally. For two or three months, the video would get 20 views in a week.

I spent about Rs 2 lakh making this video and an additional Rs 40,000 to Rs 50,000 to promote it, spending about Rs 1,500 a day to see how the conversion is working, how many subscribers I’m getting, etc. He started running YouTube ads on it too.

After 5,000-10,000 views, I stopped running ads. After two months, things started to pick up. Eventually, it took off because the video was packed with so much information that conversion into subscription was high.

Today, the video has 2.37 million views.

“But these videos don’t give you money. I realised that videos themselves are not enough to make you money because audience retention is lower as compared to vlogs, which I realised only later. It was a massive learning curve,” he adds.

Consisting of nine episodes, this vlog series was about how to explore and experience all the major cities in Switzerland while driving a rental car.

This series helped me realise that I am a legitimate travel vlogger because I provide valuable travel information while showcasing the beauty of the cities, its people, and culture and how I embed myself in them, while also editing these videos as well as possible,” he notes.

Some of his favourite budget destinations include Budapest and Prague, which he feels are locations that are as pretty and culturally vibrant as London or Paris, but at half the price. Thailand is also a favourite. One of his most popular series is ‘How to plan a Bangkok Pattaya Trip in Rs 35,000 including Flights, Visa, Hostels, Parties & Food’, consisting of 10 episodes.

By 2019, his immediate family had moved to Canada. Given his personal problems and failed business in India, Mohit also left for Canada, where he would meet his wife Sandra.

But he was running low on cash, given the expenditure incurred on his travels, buying equipment, and making vlogs. Moreover, he didn’t want a sponsor paying for his trips until he hit 1 million subscribers on YouTube.

It was during this time that he transitioned to lifestyle vlogging. Mohit felt his audience was interested to know and see how things were in his personal life.

“Earlier I was just making vlogs on budget travel. With lifestyle vlogging, viewers got a better understanding of where I came from. I started including my family members and friends in my videos. In one of my vlogs, I took my mother to New York City, and also visited my brother and sister-in-law in Canada. I began highlighting their lifestyles and mine,” he says.

With the onset of COVID-19, he couldn’t travel outside Canada. He started making more lifestyle vlogs with his friends and family but never broke away from travel vlogging.

“Fortunately, in the early days, the restrictions weren’t as strict here as it was in India. Thus, I bought a second-hand motorhome (RV) and started travelling cross-country with my mother and nephew. When I travelled to the US, we made a road trip from Chicago to Los Angeles (about 5,000 km) while driving and living in a motorhome,” he says.

“My vlogs gradually shifted from content about the location, to about me being in the said location. Look, you’ll find plenty of vlogs about Amsterdam, but what Travelling Desi is doing in Amsterdam is a subject that gives it a personal touch,” he adds.

Want to be a vlogger?

Mohit has travelled to more than 30 counties. In a year, he spends about 60 days at home, whether it’s in Canada or India. He spends the rest of the year travelling or doing related things.

“When I travel to a new country, I look for the Indian connection because that’s my primary audience,” he says.

Travel vlogging is hard work even though it looks glamorous on the outside. You sleep a lot less and it’s more work than a full-time job. Also, there is a vicious circle of wanting to travel, but also be worried about finding content good enough that would generate clicks, views and eventually revenue that can at the very least help pay for your travels

What advice would Mohit impart to those wanting to become vloggers?

“I took a different approach because I had the resources. It took me a good two years to break even because I didn’t have any sponsors and travelled out of my own pocket. Don’t spend too much on gear because viewers today prefer that raw footage and don’t care much about cinematics, thanks to micro-vlogging and shorter formats,” he says.

“To stay relevant given the plethora of content on YouTube, you need to have something that is associated with you as a creator rather than the creation itself. It has to be shown from your perspective, where people relate to you as much as they relate to the content.

Most people watching your video may have no intention of visiting Cuba, but they still want to watch what you are doing. Therefore, it’s very important to be very natural and genuine,” he says.