Tracing the History of Biryani: Journey and Evolution 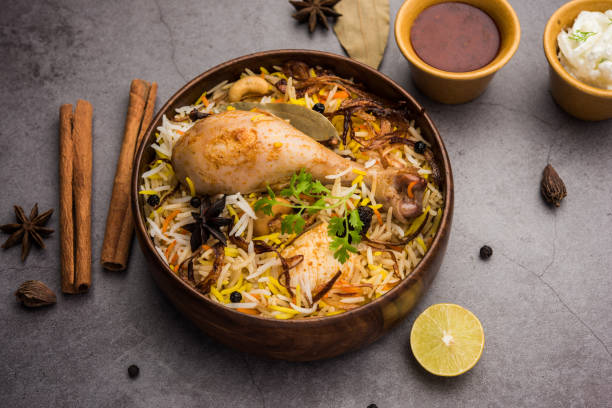 The evolution of biryani travels many centuries, with cultures, ingredients and many cooking styles.

India offers so much on its culinary platter but the one dish Indians unanimously love indulging in is the mouth-watering biryani. It is the quintessential celebratory dish and an aromatic delicacy that dazzles as a sublime one-dish meal.

With local and hyperlocal varieties having evolved into unique styles of biryanis, one is spoilt for choices when it comes to experiencing this melting pot of flavours.

Although it may appear to be a dish indigenous to India, in reality, the dish originated quite far away.

Biryani is derived from the Persian term Birian, which means ‘fried before cooking’ and Birinj, the Persian word for rice.

While there are numerous theories about how biryani made its way to India, it is generally accepted that it originated in West Asia.

Some historians say, that the dish was brought to the southern Malabar coast of India by Arab traders who were frequent visitors there.

There are records of a rice dish known as Oon Soru in Tamil literature as early as the year 2 A.D.

Oon Soru was said to be made of rice, ghee, meat, turmeric, coriander, pepper, and bay leaf, and was used to feed military soldiers.

However, the most popular story traces the origins of the dish to Mumtaz Mahal, Shah Jahan’s beautiful queen who inspired the Taj Mahal.

It is said that Mumtaz once visited the army barracks and found the Mughal soldiers looking weak and malnourished. She asked the chef to prepare a special dish that combined meat and rice to provide balanced nutrition to the soldiers – and the result was biryani of course!

At the time, rice was fried in ghee, without washing, to give it a nutty flavour and prevent it from clumping. Meat, aromatic spices, and saffron were added to it before cooking the mix over a wood fire.

The Nizams of Hyderabad and Nawabs of Lucknow were also recognised for their appreciation of the subtle nuances of biryani.

Their chefs were renowned the world over for their signature dishes. These rulers too were responsible for popularising their versions of the biryani – and mouth-watering accompaniments like mirchi ka salan, dhanshak and baghare baingan – in different parts of the country.

In this method, the ingredients are loaded in a pot and slow-cooked over charcoal, sometimes from the top also, to allow the dum or steam to work its magic.

The pot, sealed around the edges with dough, lets the steaming meat tenderise in its own juices while flavouring the rice.

Other than the technique, spices also play an essential role in dishing out a good biryani – some recipes call for very limited use of spices while others use more than 15 different spices.

Meat or chicken is often the main ingredient, though, in some coastal varieties, fish, prawns, and crabs are also used. The use of rose water, sweet edible ittar and kewra water in biryani is also common practice prevalent since the medieval era.

In the north, long-grain brown rice was traditionally used to make biryani. It has today been replaced by aromatic basmati rice.

On the other hand, in the south, biryanis were and are still made using local varieties of rice, like the zeera samba, kaima, jeerakashala and kala bhaat, which lend their distinct taste, texture and aroma to the dish.

In general, there are two types of Biryani – the Kutchi (raw) biryani and the Pukki (cooked) biryani.

In Kutchi biryani, the meat is layered with raw rice in a handi (a thick-bottomed pot) and cooked, while in Pukki biryani cooked meat and rice are layered in the handi, where they come together in a marriage of flavours.

The evolution of biryani travels many centuries, with cultures, ingredients and many cooking styles.

From an army dish to a dish fit for royalty, the biryani today is a pan-India culinary favourite. Its many varieties reflect the local tastes, traditions and gastronomic histories of their regions of evolution.

Here are some lip-smacking regional variants that every biryani lover should know about.

The Mughal Emperors were extremely fond of lavish dining experiences and looked upon cooking as an art. The regal Mughlai biryani fit the bill perfectly.

Juicy chunks of perfectly spiced meat, enveloped in kewra-scented rice, originate an irresistible aroma that makes one hungry instantly. And of course, this biryani definitely smells and tastes royal!

The world-famous Hyderabadi Biryani came into being after Emperor Aurangzeb appointed Niza-Ul-Mulk as the new ruler of Hyderabad. His chefs reportedly created almost 50 different versions that used fish, shrimp, quail, and even hare meat.

While most other biryanis are dominated by their flavoured meat, in the layered Hyderabadi biryani, the aromatic saffron-flavoured rice is the star of the dish. Hyderabad was also the place where the Kacchi Akhni Biryani was fine-tuned and perfected.

Banished by the British, the legendary gourmet Nawab Wajid Ali Shah tried to recreate his special dish in the city of Calcutta.

Unable to afford meat due to budget constraints, the local cooks gave the recipe a tweak, replacing meat with perfectly cooked golden brown potatoes – the signature of the Calcutta biryani.

Much lighter on spices, this biryani mainly uses a yoghurt-based marinade for the meat, which is cooked separately from the light yellow rice. Also, just like most Bengali dishes, the Calcutta biryani has a hint of sweetness hidden in it

Cooked in the royal Awadhi style, the textures of Lucknowi biryani are softer and the spices milder. The first step involves making a yakhni stock from meat that is slowly boiled in water and aromatised with spices for about two hours or more. This is the reason why this biryani is more moist, tender and delicately flavoured than other biryanis.

Sweet and spicy, this biryani hails from the Malabar region, specifically Kerala.

The variation of biryani in this region is as plentiful and diverse as the cultures and ethnic groups within. The Thalassery Biryani, for instance, makes use of an indigenous variety of rice – Khyma or Jeerakasala – instead of the basmati rice that is used traditionally.

Other ingredients used in this biryani include Malabar spices, meat or chicken, fried onions, fennel seeds, sauteed cashews and raisins. The Khyma is cooked separately from the meat and mixed together only at the time of serving.

Unlike any other biryani, the Sindhi Biryani is loaded with finely slit green chillies, fragrant spices, and roasted nuts. A distinctive characteristic is an addition of aloo Bukhara (plums) in the spices, which gives the biryani a beautiful aroma; lots of Khatta (sour yoghurt) in the layering gives a tangy note to the spice mix.

Similar to the Sindhi biryani, this extremely spicy variety is made by the Memons of the Gujarat-Sindh region.

Usually made with lamb, yoghurt, browned onions and potatoes, Memoni biryani uses less food colouring compared to other biryanis. This allows the natural colours and flavours of the various components- meat, rice and vegetables – to emerge and shine in this traditional dish.

Just like the city, it was created in, the Bombay biryani is a melting pot of flavours – spicy, hearty and zesty.

Bombay biryani, whether it’s made with chicken, mutton or vegetables, always has fried spiced potatoes too. It also has a slight sweetness to it, which comes from dried plums and kewra water. It may not be as famous as the other varieties, but this biryani still finds a place in the hearts of all who taste it.

Tahari biryani is cooked without meat. Typically, rice is cooked along with different kinds of vegetables in a handi with potatoes and carrots being the most used vegetables in this dish, a vegetarian version of a cult dish was born. Tahari is also a popular street food in Kashmir.

An absolutely unique Hyderabadi speciality, Doodh ki Biryani is known for its light flavours. The blending of creamy milk with roasted nuts and aromatic spices results in a dish that is subtle, refined, and delicately flavoured. Definitely a gem among the regal biryanis of the Hyderabadi Nizams.

A complete meal in itself, biryani has enough varieties to please one and all.

This is also a dish that suits all occasions – whether it is a lazy Sunday lunch, a boisterous college get-together or a formal dinner with the in-laws. Eaten with love and gusto by the rich as well as the poor, biryani is indeed a marvel of India’s culinary heritage.