One of 1st To Graduate From Her Village, Meet the Woman who Uplifted 1000s of Students – Kumari Shibulal

“We cannot be silent spectators. We need to make this a better place for the next generation. And, education is one of the best ways to make a genuine difference.”

Philanthropy is not just for the rich. From helping a friend to holding the hand of an elderly person while they cross the road—it is for everyone who wants to extend a helping hand,” quips Kumari Shibulal, the founder and chairperson of Shibulal Family Philanthropic Initiatives (SFPI), a, non-profit organisation that has transformed thousands of lives of since 2005.

Kumari was born to farmer parents in a middle-class family living in Ramamangalam, a small village in Kerala, and they ensured that both their children (Kumari and her brother) realised that education was the only road to success.

A role model to many, this understanding of the importance of education early on in her life, inspired her to start the Sarojini Damodaran Foundation (SDF) in 1999 and Advaith Foundation in 2004.

After her wedding to Mr SD Shibulal, Co-Founder and former CEO, Infosys Limited, she moved to Mumbai and then the USA. The couple returned to their home country in 1997, with the desire of doing work in the social sector, especially in the field of education, thus sowing the seeds of SDF and Shibulal Family Philanthropic Initiatives.

“Education has made a huge difference in our lives, so we wanted to spread this gift to others who are deprived in one way or another. Therefore, we decided to focus on this area,” she adds. 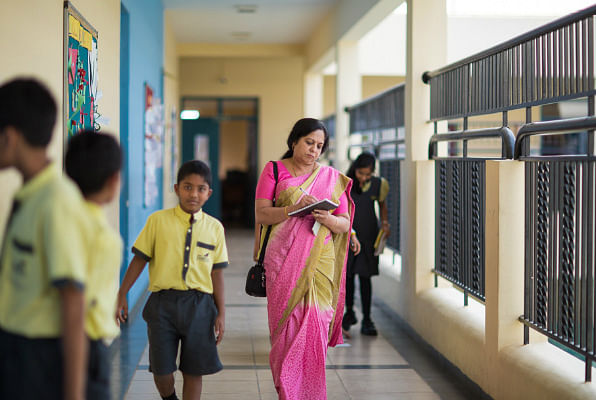 Today, with its special initiatives like Vidyadhan, Vidyarakshak, Advaith Foundation and Ankur, the foundation has changed thousands of lives of students. The family firmly believes that education is the cornerstone of all developmental progress in society and thus the bedrock of any prosperous nation.

Owing to this mission, on 14 February 2020, Shibulal Family Philanthropic Initiatives organised the second edition of the Amplio Speaker Series at Taj West End, Bengaluru. The series is an open forum for dialogue between citizens and distinguished social workers and leaders from across the globe who have dedicated their lives to global issues, and the second edition focused on the importance of individual philanthropy and the practice of giving back to the society.

The founders explained that the series was an attempt to inspire individuals and organisations to give back to society and to that end, they invited American philanthropist, Peggy Dulany as the chief guest and speaker, who co-founded the Synergos Global Philanthropists Circle along with her father, the late David Rockefeller.

Like the Shibulal Family Philanthropic Initiatives, Synergos has also been actively working to further literacy, to bridge social and economic divides and to reduce poverty and increase equity around the world.

Thanks to their common goals, the two organisations have commissioned a comprehensive report titled ‘How India Gives’ which will provide data and insights on trends in terms of both informal and formal charity or philanthropy. The report will further delve into aspects like the motivation of givers, to explore the ecosystem of NGOs, philanthropists, citizens and policymakers.

According to the founders, the report will be officially launched at the Shibulal Family Philanthropic Initiatives’ Annual Social Change Summit, which will be held later this year. “Our country has always had a rich culture of giving, but as per the World Giving Index, 2019, we rank 82nd among 128 countries. This is because philanthropic efforts in India are largely unorganised and informal. We hope this report will motivate more individuals to pay it forward and create a positive impact within their communities” said Kumari to a publication.

Through its varied initiatives, Shibulal Family Philanthropic Initiatives sponsors school and higher education for students from underprivileged backgrounds. The founders believe that it is through education that one can transform an individual, their family and the ultimately an entire nation.

“We cannot be silent spectators. We need to make this a better place for the next generation. And, education is one of the best ways to make a genuine difference,” concludes Kumari.

One of 1st To Graduate From Her Village, Meet the Woman who Uplifted 1000s of Students – Kumari Shibulal