Bharadwaj Karanth grew up in Sringeri in Karnataka’s Chikkamagaluru district. Deeply connected to the place he calls home, he noticed many people from his hometown migrating elsewhere for better opportunities.

A lecturer of Computer Science and programming at the Sri JCBM College in Sringeri, this made him think if it was possible to create opportunities in the temple town.

Moreover, having grown up in a family of farmers, he started taking note of the problems faced by farmers in the region.

“If you look at the population of Sringeri, at least 80 per cent of those who live here practise agriculture. However, the farmers in the region find it very difficult to access a market. They have to travel to Chikkamagaluru or Shivamogga, places which are almost 100 km away from their farms,” explains the 28-year-old. 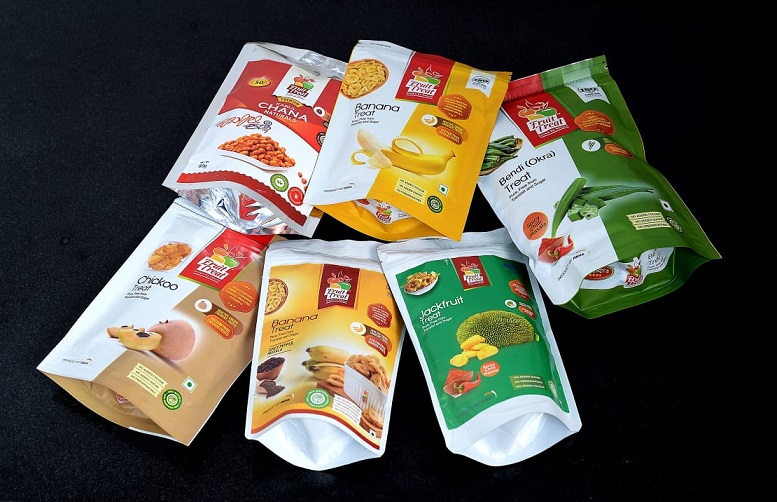 He realised that fresh produce was being wasted as farmers spent money and time in looking for a market. Bharadwaj wanted to do something to help the farmers as well as generate jobs for people in the region.

This led him to found his ‘Karanth’s Foods’ in July 2017. Under the brand name ‘Fruit Treat’, he started manufacturing 12 varieties of snacks using jackfruit, banana, chikoo, okra, papaya, mango, sweet potatoes, beetroot, and garlic, among others. About 100 tonnes of produce, sourced from over 100 farmers, is grown pesticide-free.

Moreover, chips are prepared using the vacuum frying method that uses almost 80-90 per cent less oil as compared to the conventional methods. These snacks are also 100 per cent natural, meaning they contain no artificial additives, sugars, preservatives, or colours.

These products are now sold at Cafe Coffee Day outlets, airports, e-commerce platforms like Big Basket and in the cafeterias of over 100 IT companies. The snacks have also been exported to the Middle East.

A PhD scholar and Entrepreneur 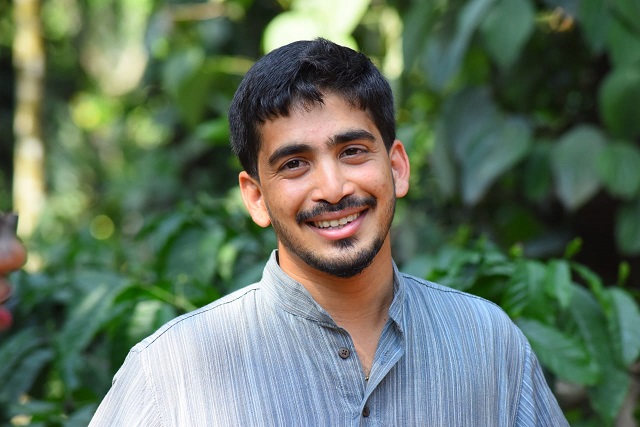 Becoming an entrepreneur was not something Bharadwaj planned for. He completed his BSc in Computer Science in 2012 from Sri JCBM College in Sringeri (where he is currently teaching). Thereafter, he went on to pursue an MSc from Kuvempu University in Shivamogga.

With an interest in academia, he pursued a PhD from Bharathiar University in Coimbatore. The topic of his study was digital image processing, which includes Artificial Intelligence (AI). Since his mentor was based in Sringeri, Bharadwaj realised that moving back would be best on two accounts — he would be back home, and it would be easy to coordinate with his mentor.

He continues, “There was such good produce in this region. Large ripe jackfruits in the region that were grown chemical-free but lacked value addition,” he states.

From 2014-2017, he met with experts and visited institutions like CSIR-Central Food Technological Research Institute in Mysuru and ICAR-Indian Institute of Horticultural Research, that specialised in food research. This helped him gain insights into the available technology. He discovered the isometric dehydration technique where fruits or vegetables are dipped in sugar and dehydrated in a dryer. But doing so made the snacks unhealthy due to the sugar content.

“On digging further, I learnt that Indonesia, Vietnam, and Thailand were consuming natural fruits and veggies in dry form but without any additives. I started looking for technology that would help me do this in India,” recalls Bharadwaj. 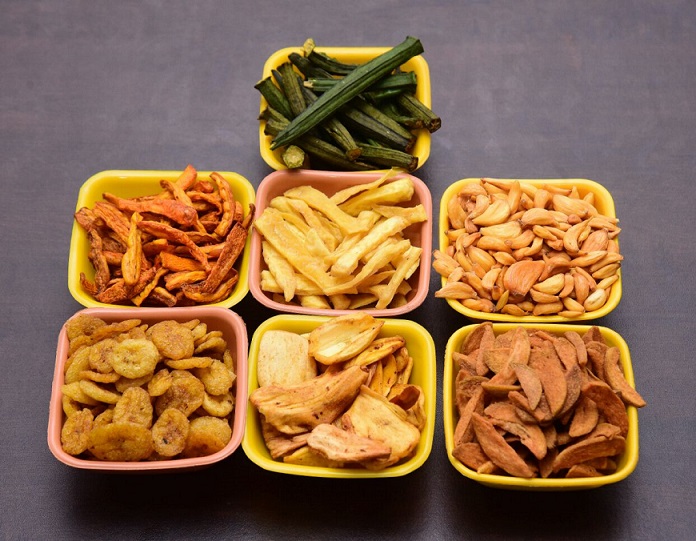 Chips of okra, garlic, banana, jackfruit, sweet potatoes among others

The vacuum frying machines used in Indonesia would mean spending Rs 40 lakh! But, relentless in his pursuit, with help from friends and family, he collected funds and applied for a loan. Finally, in August 2017, they began operations.

When the company was founded in 2017, it was called ‘Suvidha Foods and Beverages’. It was only in June 2019 that Bharadwaj decided to register the venture as a company and renamed it as ‘Karanth’s Foods Pvt. Ltd’.

“It took us time as we were still experimenting with the right temperature to get the perfect crispiness. We were also trying to get the taste right, and by January 2018, we came up with our first batch of products ready for sale,” explains Bharadwaj. 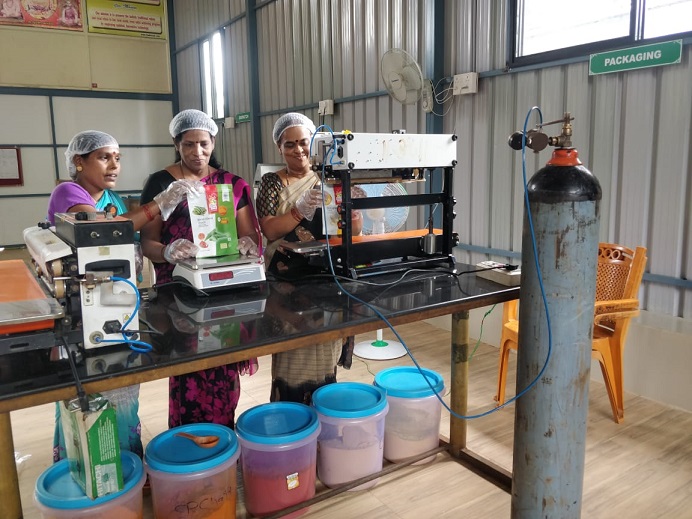 Women working in the factory unit

“Since what we were doing was new, especially in the region, farmers had a lot of questions. They did not know why we were buying from them and what for. So, building that trust took time, and now, they come to drop their produce in our factory unit,” says Bharadwaj.

Previously, he would have to go to the farmers to collect their produce. But now, a group of farmers send their produce to one location, from where it reaches the factory unit.

Nikhil MM is one such farmer whose produce goes to Karanth’s Foods. This includes jackfruit, chikoo, banana and okra.

“Since we did not have a market close by, our fresh produce would go to waste. Now, every time I visit the unit, I bring different fresh fruits and vegetables from our farm and the neighbouring ones. I bring at least one quintal of jackfruit (during the season); we are paid a fair price, and the cost of transportation is divided,” states the 24-year-old.

The snacks are processed in their most natural form with minimal seasonings. Apart from that, the taste of the products has led to a loyal customer base. 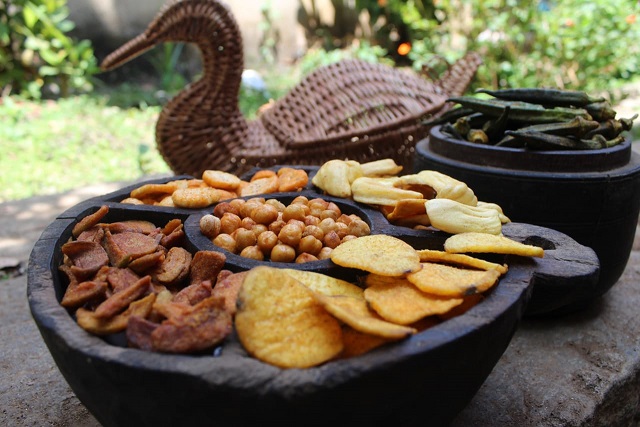 The chips are processed in the most natural way without any sugar, additives and preservatives.

Bengaluru-based IT professional Subramanya Bhat first heard about the snacks from his friends. As he hailed from Sringeri, he was intrigued to sample them, which became the talk of the town not just for the unique taste but also the initiative that helped several farmers in the region.

“About two years ago, I got my hands on the jackfruit, chikoo and the banana chips. I was mind blown! So delicious and healthy at the same time! They have retained the nutritional value of the fruits and vegetables in the most natural form, which tastes amazing,” smiles the 45-year-old.

He adds that he found Bharadwaj’s venture unique as it prevented the wastage of fresh produce. Now, he continues to snack on his old favourites, while enjoying the newer okra, carrot, beetroot and garlic chips.

Hardships and the road ahead

Working in a town that isn’t industrialised and metropolitan can entail challenges for any entrepreneur. After the initial challenges of managing capital for investing in the machinery, standardising the products was on Bharadwaj’s mind. He explains how the quantity of input is different from the resultant output.

“Moisture content of most of the produce is high. So, even if the raw material is one kilo, the output after processing is merely 100-150 gm. This means that we need large quantities of raw produce that often escalates the cost of production,” he explains. 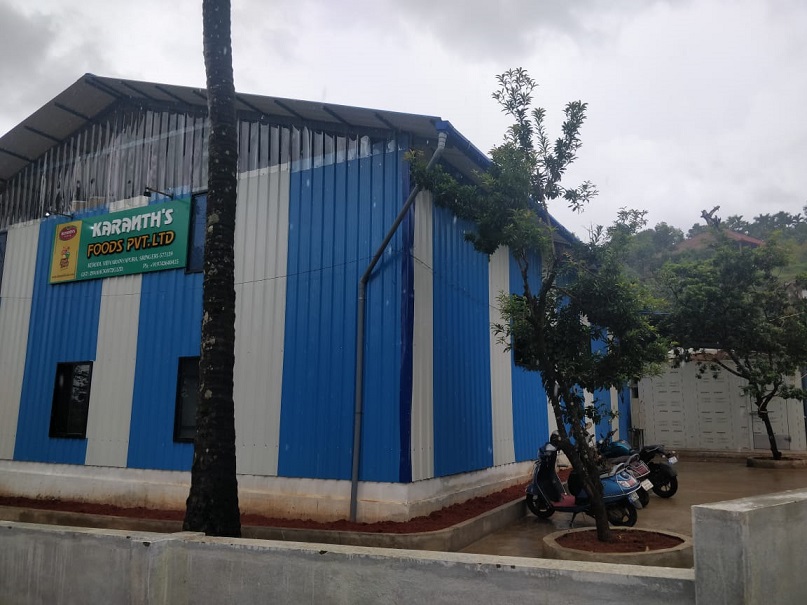 Despite the challenges, focusing on taste has helped the venture, especially in terms of investment. Bharadwaj shares how a visit from Ranjan Pai, Chairman of the Manipal Group, changed his fate last year.

“We had a function at JCBM college, and Ranjan Pai was the chief guest for the event. The Principal just offered him some snacks manufactured by Karanth’s Foods. He was impressed with the taste. I was given a card and asked to meet him in Bengaluru. He ended up investing in us,” smiles Bharadwaj.

From his learnings, Bharadwaj has a few words of wisdom for budding entrepreneurs.

“Never give up. Be unique, work hard, and people will believe in your idea. Innovation is key. Keep working towards your goals and you will be successful one day,” he says.

Now, Karanth’s foods have a lot on the cards. Bharadwaj informs that they plan on launching a new range of spices and seasonings under the brand name, ‘Ruchira’, by the end of July.

“I aspire to generate more jobs and help more farmers. People feel that a remote region in the Western Ghats cannot flourish industrially. But it is possible to start an ethical business anywhere, and support the people of the region,” he says.

Madhavi Shankar – I’m tough, ambitious, and I know exactly what I want – GWAF’21