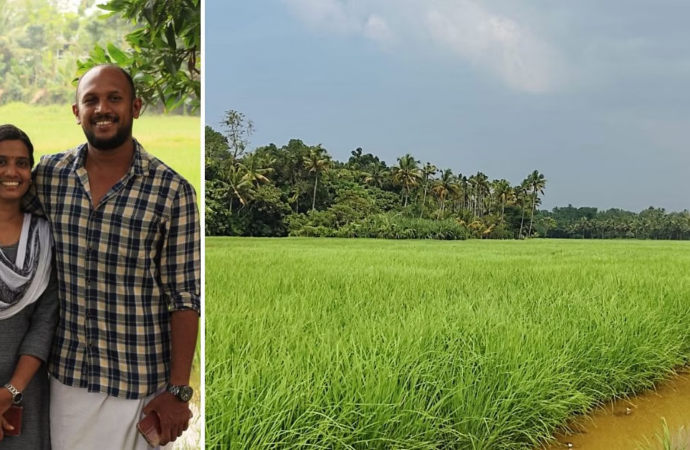 Corporate job to rice farming – An inspiring story from Kerala.

While living in Mumbai, Pavithra A and her husband Mohammed Rinas from Kerala never enjoyed the fast-paced city life. They missed being with nature and having access to clean and healthy food. The couple longed to go back home and were always looking for the right opportunity.

That’s when Pavithra came to know about a project by the Salim Ali Foundation in Kerala. She grabbed the opportunity to move back home. Thus in 2016, she left her HR generalist job at a multinational company to join as a project coordinator for the foundation. Within a year, Rinas quit his job as a mechanical engineer in the oil and gas industry to join his wife.

The couple worked for the foundation’s project in Vellangallur panchayat in Thrissur, Kerala. It was their flagship project to promote conscious and self-sustaining development in the region. After working on the project for some time, the couple was motivated to take up organic farming. Soon, they leased around 15 acres of barren land in Vellangallur and turned it into an organic farm cultivating traditional rice varieties.

Their journey from the corporate world to the social sector, and eventually taking up organic farming did not happen overnight!

Today, they have expanded their cultivation to 20 acres and are growing around 15 tonnes of paddy on average annually. They also sell value-added rice products like puttu (logs of rice flour steamed with coconut) powder, flattened rice, etc.

Their income was reduced while working for the foundation. Pavithra earned a small salary whereas Rinas mostly worked for free. But they say they were the happiest when they stepped into social work.

The shift wasn’t easy, but I don’t have any regrets, I hated working in air-conditioned offices, and I am now happy that I get to work on the field, that too for a social cause.

According to them, this experience opened a whole new way in front of them that eventually inspired them to take up agriculture.

“As part of the project, we worked together to create awareness about organic farming among farmers. Besides, Rinas helped the farmers with the technological and machinery-related aspects like setting up drip irrigation systems, aquaponics, etc,” explains Pavithra

Working on the project itself was a learning experience for the couple who realised the importance of growing clean food.

While working in Mumbai, I used to read about farming over the internet. But I really got interested in it only after working on the project. Pavithra also shared the same interest. So, we both decided to take up paddy cultivation as we Keralites consume a lot of rice, and therefore it is essential to cultivate it organically

But it was easier said than done. Even though they decided to start farming on 15 acres of land, Pavithra says, “We didn’t have enough money to kick start it. So, we had to pawn some jewellery from Rinas’s mother, and that’s how we started our farming journey.

The land was barren and was left unused for several years. It was the first challenge they faced while starting out farming.

The couple focused on traditional rice varieties because they believed that it’s more sustainable and nutritious than the hybrid ones. “We also felt that it is essential to bring nutritious and clean food into the market,” says Pavithra.

Rakthashali, Kuruva, Thavalakannan, Kunju Kunju red rice, Njavara, Kodukanni and Pattambi are some of the traditional rice varieties they have cultivated so far. “Among all the varieties Kuruva and Kodukanni have been the most yielding,” says Rinas.

According to him, “On average, we could cultivate around 15 tonnes of paddy from 20 acres.” Though they were able to cultivate around 1,500 kg per acre in the first harvest in 2018, the following years were a bit challenging. “Due to floods, cyclone Ockhi, and the pandemic-induced restrictions, it was very difficult for us to find a pace. But this year we are hopeful as it has been going smoothly,” says Pavithra reminding us that it’s still unpredictable due to the drastic change in the climate.

Pavithra and Rinas not only grow rice, but also make several rice-based value-added products such as flattened rice, rice powder, and puttu powder.

We sell Kuruva rice for Rs 90 per kg and its rice powder and puttu powder for Rs 140 per kg. We also make the same products out of other rice varieties like Rakthashali, on request, and they promote their products through social media.