Roads being the throbbing lifeline of any country, the Indian Govt. is investing a gross chunk of funds, especially after 1995, for their construction, rehabilitation, and maintenance.

Shortage of govt. funds for such a mammoth cause is being made up by operating many road projects on a BOT and TOT basis.
After the independence, many milestones have been achieved by our engineers. Completed in 2010, Bandra Worli Sealink is an engineering marvel using steel wires equal to the earth’s circumference. It took a total of 2,57,00,000 man-hours for completion and also weighs as many as 50,000 African elephants. Khardung La is the highest motorable road in the world. 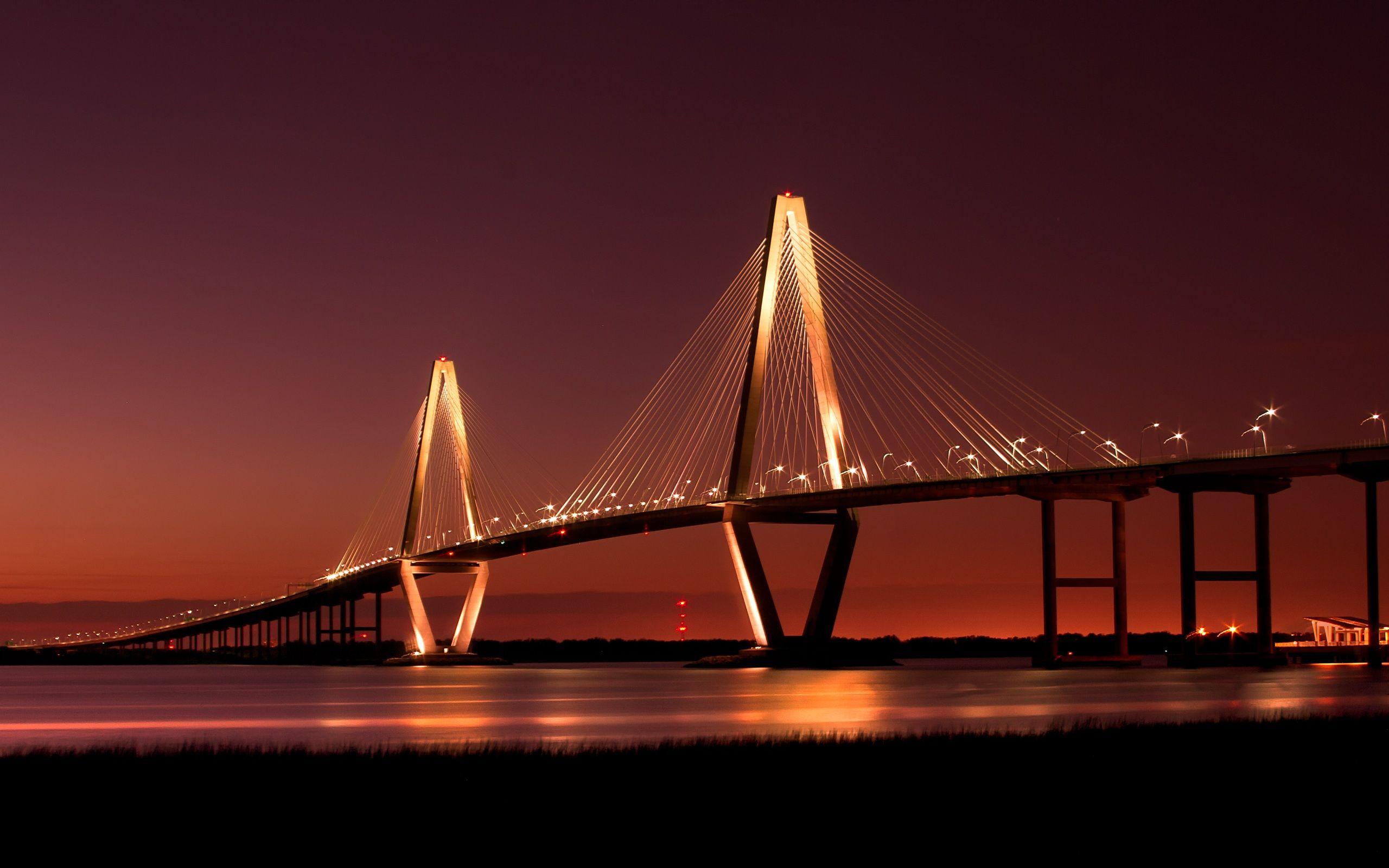 As of March 2019, India had completed and placed in use over 1,32,000 km of National Highways. Expressways are the highest class of roads in the Indian road network. They are six or eight-lane controlled-access highways where entrance and exit are controlled by the use of slip roads.
Currently, approximately 1,455.4 km of expressways are operational in India with a target of an additional 18,637 km of expressways by the year 2022. As of now, India has one of the lowest density of expressways in the world.
Divided into five categories (NH, SH, MDR, ODR, and VR), are the important mode of transport in India. India has a network of over 5,897,671 kilometres of roads as of 31 March 2017. This is the second-largest road network in the world, after the United States with 6,645,709 kilometres.
At 1.80 kilometres of roads per square kilometre of land, the quantitative density of India’s road network is equal to that of Germany and substantially higher than the United States (0.68 km), China (0.49 km), Brazil (0.18 km) and Russia (0.09 km). Adjusted for its large population, India has approximately 4.87 kilometres of roads per 1,000 people, which is much lower compared to developed countries. As of 31 March 2017, 63.24% of Indian roads were paved. India’s road network carries over 65 per cent of its freight and about 85 per cent of passenger traffic. It contributed 4.7% towards India’s GDP.
Due to the abundance of good quality cement currently sweeping across the country, the stress is not getting shifted towards the cement concrete roads over the blacktop bitumen concrete roads. The life cycle cost of flexible pavement is about 19% higher than rigid pavement after 20 years. As the life of the concrete pavement is more than 30 years, after 20 years life concrete pavement will further serve for at least the next 10 years with nominal maintenance.
More so, a vehicle, when run over a concrete road, consumes 15-20% less fuel than that on asphalt roads. This is because of the fact that a concrete road does not get deflected under the wheels of loaded trucks.
Prime Minister has recently sanctioned an ambitious Bharat Mala Project costing nearly 5.35 lakh crores for the total investment for 83,677 km committed new highways, making it the single largest outlay for a government road construction scheme. The project will build highways from Gujarat and Rajasthan, move to Punjab and then cover the entire string of Himalayan states – Jammu and Kashmir, Himachal Pradesh, Uttarak. 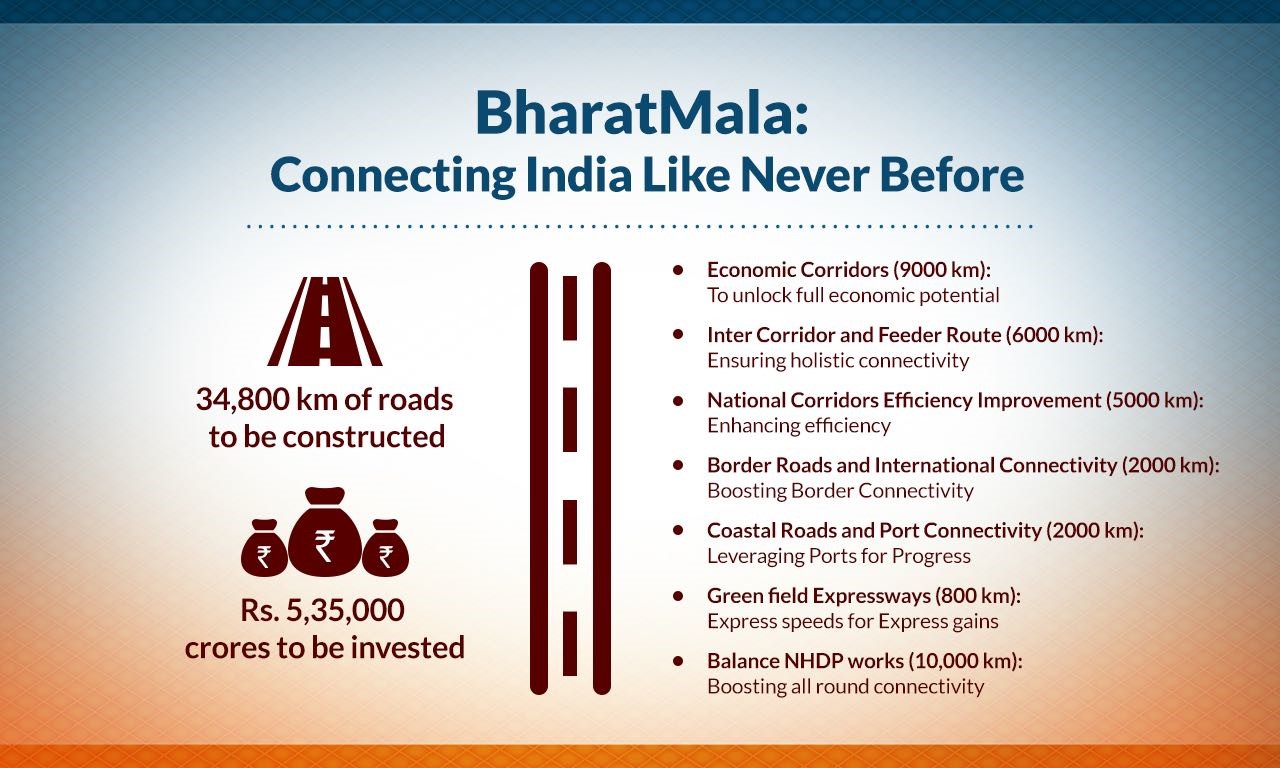 Projects such as Golden Quadrilateral and North-South and East-West Corridors have given faster and safer movement across the country. NH 44 covers the North-South Corridor of NHDP and running over 3,745 km from Srinagar to Kanyakumari, it is the longest national highway in India.
Pradhan Mantri Gram Saḍak Yōjana, popularly known as PMGSY, is a nationwide plan in India to provide good all-weather road connectivity to unconnected villages. In Phase II, 178,000 habitations with a population of above 500 in the plains and above 250 in the hilly areas were planned to be connected by all-weather roads by March 2019.

The Phase-III of PMGSY aims at consolidation of 1 lakh 25 thousand Kilometers through Routes and Major Rural Links that connect habitations to Gramin Agricultural Markets, Higher Secondary Schools and Hospitals with an estimated cost of 80 thousand 250 crore rupees for the period 2019-20 to 2024-25.
The Central Share will be 53 thousand 800 crore rupees. The funding pattern for the scheme will be 60:40 between the Centre and the States. For North-East and the Himalayan States, the ratio will be 90:10.
Road safety is a term that is being widely talked about. It’s a good move that Govt. has made wearing helmets and safety belts compulsory. It just might save many lives. But, on the other hand, Govt. should also monitor the conditions of roads. At many places, the speed-breakers are arbitrarily being provided disregarding all rules and specification where the road itself is bad enough to serve the function of speed-braking. 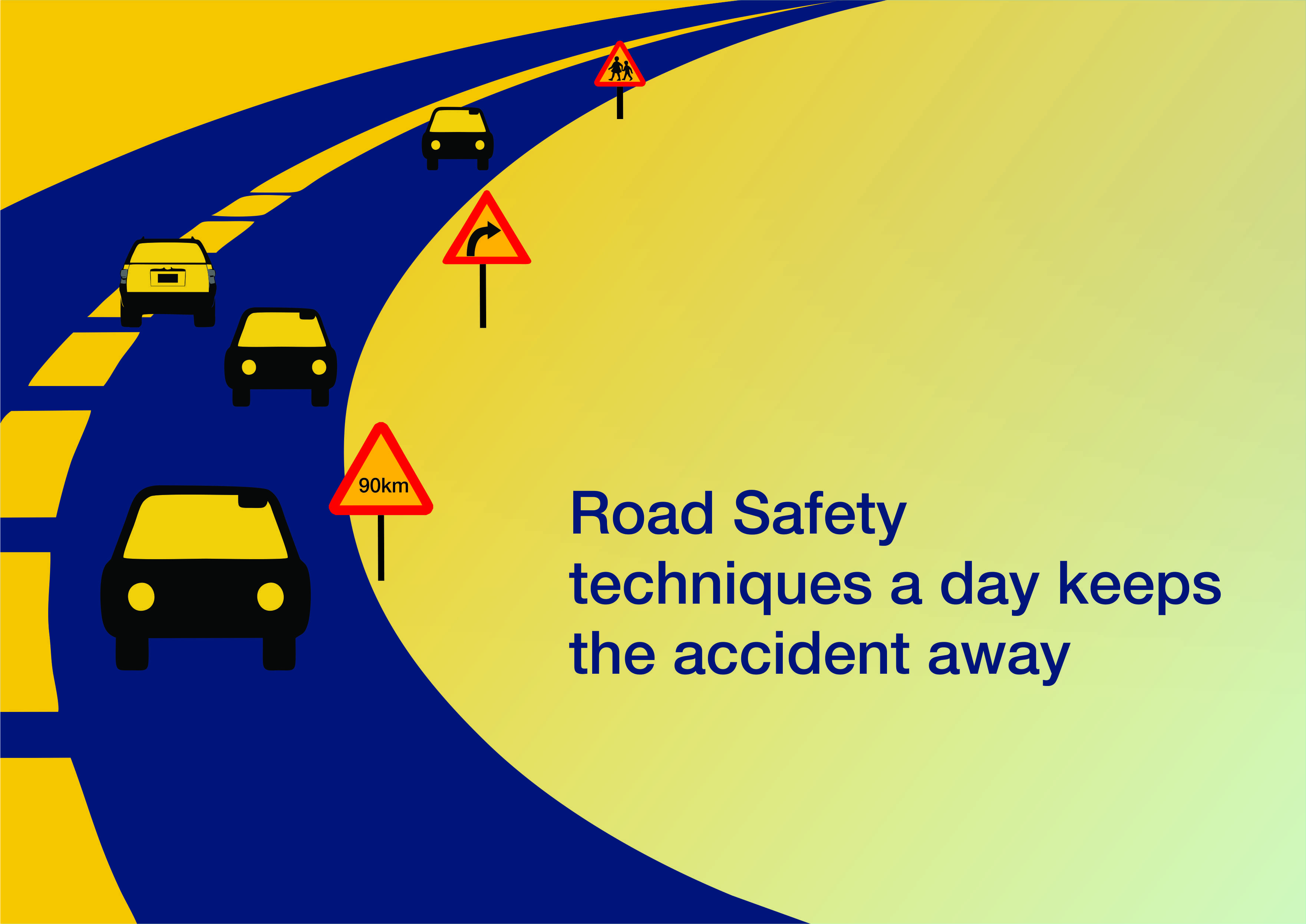 Road markers and road signs are not in place on many roads. At many places, anti-crash metal barriers are either not installed anchor being installed disregarding all guidelines. Cattle ramp-walk is common on many Indian roads causing many accidents every day. Many man-holes are uncovered inviting accidents.
However, Govt. can not be held responsible for all the above problems. Metallic man-holes are stolen. Encroachment is a persistent problem everywhere on rural roads. Common man, petrol pumps, dhabas, and roadside restaurants are raising ground level in front of their constructions, obstructing thereby the road-drainage. Undrained water being the greatest enemy of bituminous roads, improper drainage is mostly responsible for their degradation.
The median plantation is done but not maintained quite often. National Highways being constructed and maintained by private companies are fined heavily by NHAI (National Highway Authority of India) if they fail to comply with the IRC Codes. But when it comes to other roads, the overall maintenance of the carriageway is not that good. 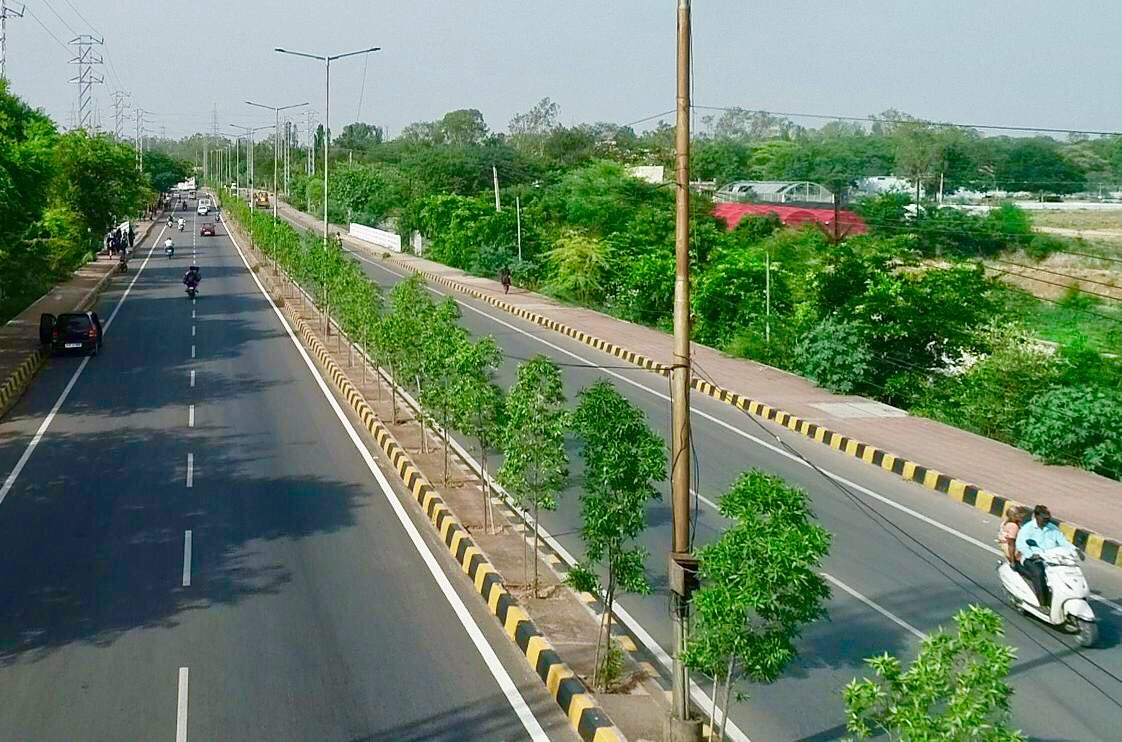 NHAI and the National Expressways Authority of India are doing good jobs in maintaining roads under their jurisdiction. NHAI has recently launched two mobile apps (MyFASTag and FASTag) to ensure the smooth functioning of the Electronic Toll Collection system. Dedicated ETC lanes are being developed in all toll-plazas.
However, when it comes to another category of roads, proper maintenance of roads is only possible with the voluntary partnership of the public with the road-building authorities and framing stringent laws to prevent encroachment and obstructing the drainage of roads. With an efficient system in place, we have all the latest technologies, experts, and machinery handy to enjoy the international quality of roads. International yoga day : A day to hang out with your soul

Made by Dev Anand’s brother, this is the first Indian film to win ‘Cannes’ highest honour